2.1.4 Explain principles of pyramids of numbers, pyramids of biomass and pyramids of productivity, and construct such pyramids from given data.

Cover lesson tasks with instructions for pyramids and bioaccumulation along with readings from Rutherford, J. : Monday 18th 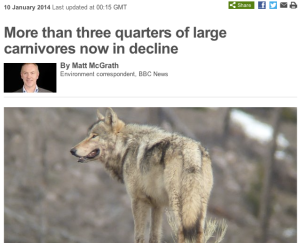 The Rise and Fall of DDT in America – Case study

This video helps demonstrate both the extreme popularity of DDT as well as the decline of DDT after Rachel Carson published her famous book, Silent Spring.

Silent Spring, published years ago (1962) raised awareness of harmful effects of DDT. Some large birds that are top predators or scavengers almost became extinct due to the biomagnification of DDT. The US banned DDT in 1972, though it is used in other parts of the world to control malaria mosquitos and other disease vectors. Discussion continues regarding when and if DDT or other similar toxins should be used in certain situations.

Why are organisms at the top of the trophic level more vulnerable? DDT and toxins in the food chain is an example…

The pesticide accumulates in body fat and is not broken down. Each successive trophic level supports fewer organisms, so the pesticide becomes increasingly concentrated in the tissues (this is called biomagnification). Organisms higher in the food chain also have progressively longer life spans so they have more time to accumulate more of the toxin by eating many DDT-containing individuals from lower levels. Top carnivores are therefore at risk from DDT poisoning.

2.1.4 …construct pyramids of numbers, biomass and productivity from given data. 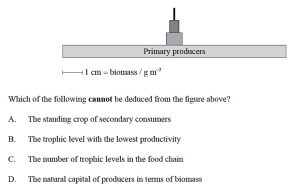