3.5.1 Outline the issues for global imbalance in food supply.

How has food production changed over the past few decades? There has been a decrease in production per capita at a regional scale but an increase in actual values at a global scale. Why? [refer to readin] 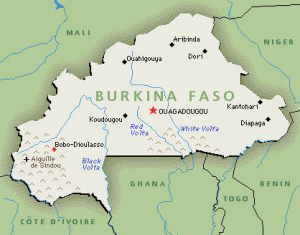 Ninety percent of all jobs and 50% of total export income in Burkina Faso comes from agriculture. The majority of people are subsistence farmers; people farming to feed themselves. The main crops are millet, maize, sorghum and rice plus vegetables and fruits. Goats, cattle and sheep are the

In recent years other cash crops like cotton and sugar cane have become important. Cotton accounts for half of Burkina Faso’s exports (by value) and over a third of its GNP. The main cotton producing area is between Ouagadougou and Bobo Dioulassa. There have been great efforts to increase production in the past 10 years but, despite increasing the amount of land being planted, this has not been very successful. Flooding, a drop in world prices and insect damage have all contributed to this.

Conditions for farming are difficult with a long dry season and a short rainy season (mid-May to mid-September). In recent years rainfall has been very unreliable. Unusually heavy rainfall led to flooding in 1994, seriously disrupting the cotton crop. In 1996 and 1997 widespread drought meant that 67,000 tonnes of emergency food aid had to be brought in to deal with subsequent food shortages. Large areas in the south are infested by blackfly which cause river blindness, so much fertile land has not been able to be cultivated. Whilst unreliable rainfall and poor soils make farming very difficult, it is the problems brought by rapid population growth which are causing most concern. Land and resources are coming under intense pressure as the population grows.

Almost half of Burkina Faso (the north) falls within the Sahel region. A number of climatic and human factors have led to land degradation in the last 35 years including:

Over thirty years ago a cheap, simple but effective method to reduce soil erosion was introduced to Burkina Faso. The scheme was set up by OXFAM, encouraging farmers to build a series of small stone walls called diguettes in their fields. The walls acted like small dams, preventing surface run off and allowing rain to sink into the soil. A transparent piece of plastic tubing containing water and fixed to two uprights helped work out the slope of the land and walls were then built along the natural contours. In places this has increased yields by up to 50%. Soil and water conservation, alternative fuel supplies, higher yielding, more drought-resistant crops, precise targeting of overseas aid plus use of the FEWS (Famine Early Warning System) to predict food shortages are all factors which may help keep marginal farmland productive or help Burkina Faso respond quickly in years when rainfall is low.

The impact of runoff and erosion phenomenon on a stony line. This line located up-stream, has not yet been stabilised with vegetation like Andropogon gayanus.

3.5.2 Compare and contrast the effeciency of terrestrial and aquatic food production systems

Human “carrying capacity” on earth is hard to estimate, because it depends upon affluence of a population and the technology supporting that population. But at present levels of affluence and technology, a population 50 to 100% larger than we have today would push our use of terrestrial NPP to well over 50% of the available production, and the attending degradation of ecosystems on earth (e.g., air and water pollution) would be of major concern. Thus the limits to unchecked growth must be very near. Notice that the lower we “feed” on the trophic chain, the more efficient the web of life becomes — eating animals that eat animals that eat plants is a very inefficient use of solar energy