It is relatively easy to recall and compare technocentric and ecocentric values systems. However connecting, applying and comparing these philosophies to two specific ‘named societies’ (as mini-case studies) is taking your learning to a higher level of thinking.

We know that First Nation Americans are traditionally ecocentric and deep ecologists, whereas technocentric European pioneers settling in North America (late 1800s) held a mainly cornucopian values system.  The trick here is to use these two contrasting societies as a means to evaluate and justify the similarities and differences in the two extremes of the environmental philosophies continuum.

According to First Nation Americans…

1. Everything is connected – holistic view (interdependent) which links to biodiversity. This is different to ‘the west’ because it is non-hierarchal, humans are one part of a whole.

2. Stewardship (sense of responsibility) – live in harmony with nature, everything has a spirit. For example, a rock is sometimes called a “grandfather rock”

4. The planer is refered to as Mother Earth for which there is no true translation but ‘Living’ Mother Earth and Gaia are similar concepts. Land is a living entity and it is not owned by any tribe whereas European pioneers divided up the land (land ownership) and see it as capital.

5. Nature and the environment is all about a sacred balance and giving thanks for resources used or taken. There is a sense of responsibility and stewardship – what can we give back? For example, sweet grass known as “the hair of Mother Earth”, is always braided before cutting as a sign of respect. Tobacco is important to some of the First Nation peoples. The plant root has a medicinal value and was thus sometimes offered after killing an animal in the form of smoking tobacco (pipe) as a ritual or prayer. The smoke brings with it the prayer or thanks back to the spirit world. The use of tobacco is very different in the original European ‘western’ world. What do you think the reactions of the First Nation Americans would be towards a society that chews tobacco and spits on Mother Earth?

6. Interconnections and humility fundamentally important to enforce and pass on as 7th generation teaching is important. Thinking ahead 7 generations with every environmental action and decision of today are essential in planning for the future. Every living organism has this right (to be considered). Traditional story-telling takes on an environmental teaching approach that show historical connections with biodiversity which can also be seen on historical birch bark scrolls.

7. Traditionally, social organisation (government) is in clans which also highlight the importance of animals. Each division is based on animals, for example the “bear clan” role is to protect and the “Crane clan” are leaders who have the power of chieftains. They rarely speak or talk, but when they do, what they say is a reflection of what others have said, they are the echo of ideas. The ‘politics’ is action, not s/he who speaks the loudest.

“Every part of this country is sacred to my people. Every hillside, every valley, every plain and grove has been hallowed by some fond memory or some sad experience of my tribe. Even the rocks, which seem to lie dumb as they swelter in the sun along the silent shore in solemn grandeur thrill with memories of past events connected with the fate of my people, the very dust under your feet responds more lovingly to our footsteps than to yours, because it is the ashes of our ancestors, and our bare feet are conscious of the sympathetic touch, for the soil is rich with the life of our kindred.” – Chief Seattle 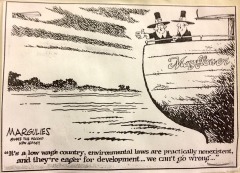 1. based their lives on so-called ‘frontier’ economics and exploited what they saw as unlimited resources in their new homeland.

2. Pioneers in the East cleared the land of its lush forests using slash and burn techniques. In the Midwest, settlers tried to bring fertility and agriculture to the land of the Great Plains.

3. As the population of settlers increased the connection with the environment was lost. Industrialisation grew and came to be a dominant part of the country’s economy. Resources were over-exploited in many cases as pioneers took all the opportunities for growth and development that they saw.