By the end of this topic you will be able to:

A little bit of fun – You are one in 7 billion!

On October 31, the world’s 7 billionth person was born. Each of us is part of that population. With the world growing by more than 200,000 people a day, it’s hard to know where you fit in. Click here and enter your birthday to find your number…

How do we measure growth? Arithmetic Growth v. Exponential Growth

If you had $100 and added $10 to it the first year and each successive year, how much money would you have… after 10 years? What would a line graph look like if you plotted this data? This is arithmetic growth – growth that results from a constant rate of change over time.

If instead you had $100 and it grew by 10% each year, your money would be growing on an ever-increasing base. How much money would you have… after 10 years? What would a line graph look like then? This is exponential growth, growth that results from a constant percent increasing rate of growth over time. Populations tend to grow the same way. Because the base population is always increasing, population grows exponentially, as long as there are sufficient resources. Without sufficient resources, a population would exceed its carrying capacity and decline.

Below are two species population graphs you should already be familiar with: the s-curve (sigmoid) of a typical bacteria population limited by its environment and the steady-state equilibrium curve of a typical rabbit population in a prey-predator relationship with fox. You should thus be familiar with the lag phase, exponential phase, arithmetic phase and equilibrium phase in the sigmoid growth of a natural population growth curve. Other familiar concepts include factors that affect he environment’s carrying capacity (K) such as several resources and functions. Populations can also be regulated by density independent factors such as natural disasters, droughts, fires, etc. 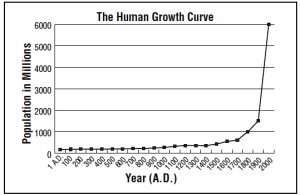 View the following video clip from National Geographic entitled “7 billion” and note down three main points that are conveyed in the message.

“The earth will not continue to offer its harvest exept with faithful stewardship.” – John Paul II

What do these quotes mean, and do you agree?

TASK: The case study readings below describe and explain two contrasting governmental population policies to control growth. Based on the readings, evaluate at least three successes and three failures of Singapore’s pro-natal policy and the same for China’s anti-natal policy.

Singapore is a developed country in SE Asia with a population of about 5 million people. For many years the Singaporean government has believed that Singapore is underpopulated and has tried to increase its population. Singapore has one of the lowest total fertility rates in the world, standing at 1.1, which is well below the replacement rate of 2.1. Already 36% of the Singapore population is made up of foreign nationals and in some sectors like industry, 80% of the workers are foreign. To overcome worker shortages, the Singapore government has encouraged immigration, but it is also trying to increase the population through raising birth rates. The government is doing this in a number of ways. It has increased maternity leave by 50% to 12 weeks and it will cover the cost of maternity leave (the cost to the parents employers) for the first four babies. The Singapore government is also increasing child benefits paid to families. The government will pay money into a special bank account of up to nearly $1000 for six years. The Singapore government has also sponsored dating organisations to encourage people to get married earlier and start having children. If Singapore’s policies are not successful it will become increasingly dependent on foreign workers, gradually see an increase in the dependency ratio and ultimately economic decline.

China currently has the largest population in the world, standing at about 1.3 billion. China is the third largest country in the world, but only about 10% of its area is good for arable farming. Much of the west is covered in mountains and much of the north is desert. China probably has the most famous population policy in the world. However, not everyone knows is that China actually had a pro-natalist policy after the end of World War II. During the war China was occupied by the Japanese. The Communist government never wanted this to happen again, so encouraged population growth to create a large army. This policy saw rapid population growth, but unfortunately the availability of resources was not growing at the same rate and in the early 1960’s an estimated 20 million people died from famine. Because of the famine, in 1964 the government tried to promote birth control, but the birth rate still stood at 45 between 1966 and 1971. Because of the high birth rates the government promoted a new campaign ‘Late, Sparse, Few’. However, the government didn’t believe that this was having a significant enough effect and in 1979 introduced the one child policy. Demographers estimated that China’s optimum population was 700 million and the aim was to meet this figure by 2080. The policy was strictly enforced and there were punishments for people who did not follow the policy including fines, loss of jobs, removal of education and health rights for children and for women caught to be pregnant with a second child forced abortion and sterilisation. At the same time as punishing offenders the government was also promoting the use of contraception and encouraging people to get married later. There are also some exceptions to the rule, families in rural areas were often allowed two children where people were needed to work on the land and ethnic groups were also allowed two children.